Yet Another Lawmaker Tells Gov. Murphy to Not Hit Business With UI Tax Increase 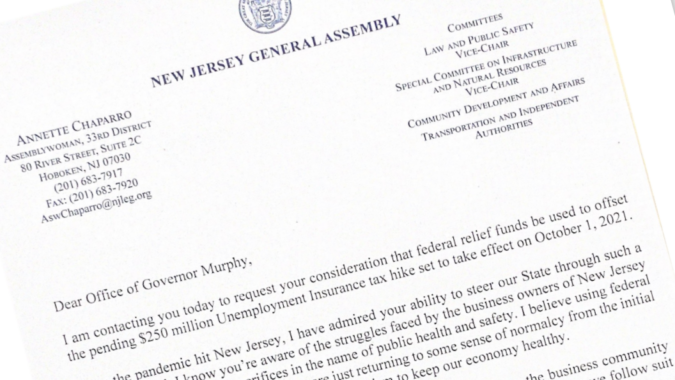 In a letter to the governor, Assemblywoman Annette Chaparro said she believed that using federal relief funds to negate what could eventually be a $1 billion tax hike on business over the next three years “is an appropriate mechanism to keep our economy healthy.”

“Other states have taken this route, and I hope we follow suit to keep New Jersey working,” she wrote.

Chaparro joins a list of Democratic lawmakers urging the governor to use federal COVID-19 aid to reduce the unemployment payroll tax on employers, as most states have done.

In recent weeks, Senator Troy Singleton (D-7) noted in a letter to the governor that the American Rescue Plan was created to assist state and local governments with their economic recovery from the coronavirus pandemic.

Assemblyman Gordon Johnson (D-37) noted that “many other states” have used federal funds from the American Rescue Plan to alleviate UI Trust Fund obligations in a letter to the governor.

Republican lawmakers announced earlier this month their intent to convene a special session of the Legislature to prevent a massive payroll tax on businesses in order to replenish the state’s depleted Unemployment Insurance Trust fund.

Senate and Assembly Republicans said they circulated a petition to legislative Democrats that would constitutionally require the governor to call a special session – if it is signed by a majority of the members of each house of the Legislature.

Gov. Murphy has thus far not provided specific answers on the matter, or issues related to it.

During a press briefing on Wednesday, Murphy was asked why the state would not use the state’s debt avoidance fund or federal stimulus dollars to avoid paying $193 million in interest on a federal loan for unemployment insurance benefits?

“I think the one thing we want to do is make sure we’ve got the highest rate of return on wherever we deploy our money,” Murphy said. “So my guess is we’ll look at the interest versus the return we get deploying that money elsewhere.”