Election Takeaways and What it Means for NJ Business

In the aftermath of a bitterly divisive national presidential election, New Jersey’s business community faces new challenges amplified by the current political climate, says Benjamin Dworkin, the director of the Rowan Institute for Public Policy and Citizenship at Rowan University.

“If you haven’t already, you need to start thinking about how you handle the aftermath of this election,” Dworkin said. “Over the next few months, we may see massive social unrest and your employees, your companies are not in a bubble. What happens out there is going to get inside and affect you too.”

Business leaders should be prepared to handle office dynamics that may change depending on the official outcome of the election and plan for how they will lead their teams going forward, he said.

“Protecting your company’s brand in a chaotic time where everyone seems to be attacking everyone means you have to build up trust and goodwill,” Dworkin said.  This includes trust and goodwill with your employees, your customers, the public, and with the media and the government, because it’s a different world today for corporate America than in the Reagan Era.

“You need to expect more unwanted attention from Washington and Trenton, from the press, and from very tech–savvy and increasingly activist population who are going to be coming after you with their phones, saying, ‘I don’t like how you’re behaving and I’m going to organize people about that,’” he said.

“How you lead over the next 12 months will be a critical part of your corporate legacy, and a deep reservoir of trust and goodwill will help you more than almost anything else,” Dworkin said.

“In the aftermath of any political crisis in America are reforms,” Dworkin said. People turn to far-Left or far-Right populists for leadership when they are unhappy with the way their government is functioning, just as an unhappy customer goes elsewhere when they have a bad experience with a business, he said.

The business community should set the standard for the responding to today’s challenges, he said.

“I’d encourage you to consider your corporate obligation to be more engaged in public affairs and with our government at all levels, not just in terms of (asking) how will this affect my business … but simply because if things get done, you will do well,” Dworkin said. “And when things are dysfunctional, you won’t.”

Dworkin also discussed another takeaway from the 2020 election: New Jersey’s suburbs are more heavily Democratic than ever before.

“I really think it’s important to understand how much New Jersey has been changing politically,” Dworkin said.

“These new Democrats are moving into what we used to call Republican suburbs: northern Bergen County, eastern Morris County, Somerset County and Burlington County. All are much more Democratic than they were before,” he said.

“This partisan redistribution is having huge implications for New Jersey, both in this election and moving forward,” Dworkin said. 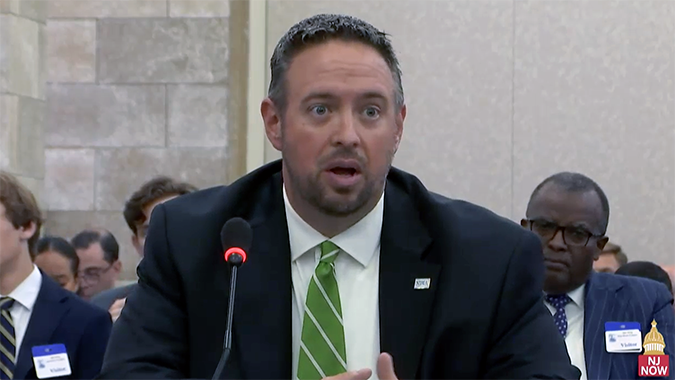