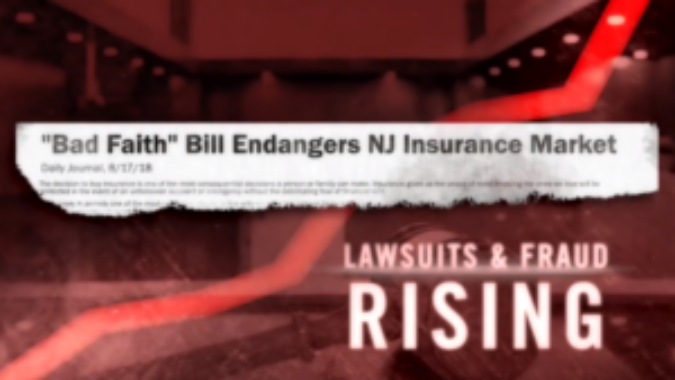 While insurance has never been cheap in New Jersey, costs have been relatively stable for the last 15 years or so.  That could change for the worse under legislation that is about to get a committee hearing in the Assembly.

The “Bad Faith” bill under consideration in the legislature could raise auto insurance rates by 39 percent, as well as the costs for general liability and other insurances. That’s why NJBIA is asking its members to contact legislators and urge them to vote No on S-2144 and A-4293.

“The message we are trying to send is, Don’t touch my insurance,” said NJBIA Chief Government Affairs Officer Chrissy Buteas. “This bill would open the flood gates for lawyers to sue for anything they deem ‘bad faith’ and put insurance companies and their policy holders over a barrel.

“The resulting litigation costs would fuel a jump in insurance premiums that would make New Jersey even less affordable than it already is.  We need to stop this bill,” she said.

The cost increases are not hypothetical. The independent actuarial firm Milliman estimates that the bill would increase insurance costs by as much as:

NJBIA is partnering with the Insurance Council of New Jersey to organize a grassroots campaign to stop the bill. Companies can contact their elected representative using the council’s Voter Voice system. Go here to call Assembly members, or go here to send them letters.

“We do not want to see unscrupulous lawyers target businesses with meritless lawsuits in the hopes of obtaining settlements from companies afraid of litigation costs,” Buteas said. “The ultimate price will be paid by the consumer as premiums will rise to cover either the settlement or litigation costs.”

S-2144/A-4293/3850 would rewrite the legal definitions of good faith and bad faith in a way that overzealous attorneys would be able to sue insurance companies for normal mistakes that occur in the ordinary course of business. The unfortunate reality for many companies, particularly good actors, is settling the case out of court often makes more financial sense — even if the defendant is convinced the case is winnable.

2 responses to “Join the Fight Against Higher Liability Insurance Costs”