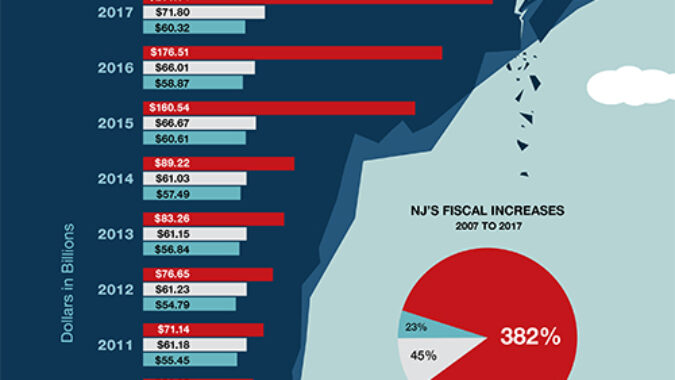 The New Jersey Business & Industry Association today released its analysis of audited state revenues, expenses and debt, which shows that over the past 10 years state expenses have significantly outpaced state revenues, and state debt has ballooned by 382 percent.

“As the interest on state debt continues to grow, pressure builds on the state budget, forcing the governor and Legislature to consider tax increases to fund priorities such as education, transportation, infrastructure and other state services,” NJBIA President & CEO Michele Siekerka, Esq.

“This scenario played out again last July when the FY 2019 state budget forced $1.6 billion in higher taxes on New Jersey businesses and residents to cover state expenses,” Siekerka said. “We cannot afford to continue down this same road with the FY 2020 budget.”

In a letter sent to Gov. Phil Murphy last week, NJBIA noted that the CAFR shows New Jersey’s combined net pension liability and post-employment benefit obligation is currently $151.6 billion — four times the state’s annual budget. These obligations will increase by $1 billion a year if nothing is done.

To address this problem, NJBIA urged the governor as part of his FY2020 budget proposal to transfer state and local government employees from the current platinum-level health coverage to gold coverage, comparable to what most of the best private sector companies in New Jersey offer their employees.

NJBIA also noted its support of the New Jersey Economic & Fiscal Policy Workgroup’s recommendation to shift all new public workers at the state and local levels, along with not-yet-vested workers, from the defined retirement benefit plan to a cash-benefit plan, or hybrid retirement benefit providing a pension for the first $40,000 of earnings and a 401(k)-style account for income earned above $40,000.

“These reforms will greatly improve New Jersey’s fiscal challenges in the short and longer term and serve as an alternative to the established and ineffective pattern of remedying budget imbalances with increased or new taxes on overburdened businesses residents,” Siekerka said.

NJBIA continues to call for no new or increased taxes in the proposed FY2020 budget, which the governor is scheduled to present to the Legislature tomorrow. Any additional taxes, Siekerka said, will not come close to filling New Jersey’s fiscal deficiencies.

Siekerka noted the FY2019 budget was balanced on the backs of New Jersey businesses who were hit with an increase in the Corporate Business Tax rate, now the second-highest in the nation. There was also an increase in the Gross Income Tax, which affects pass-through businesses whose owners pay taxes on business income through their personal tax returns.

Since the FY2019 budget was enacted, businesses have also been hit with other costly state mandates that include: a $15 minimum wage, enhanced paid sick leave and expanded paid family leave mandates, higher energy delivery costs and fees from added renewable energy efforts.

“NJBIA respectfully encourages the governor and the Legislature to recognize the cumulative impacts of all these added costs and taxes, particularly on small businesses in New Jersey,” Siekerka said. “More taxes and costly mandates will affect the survivability of many of our small businesses and have a chilling effect on the state’s economy.”