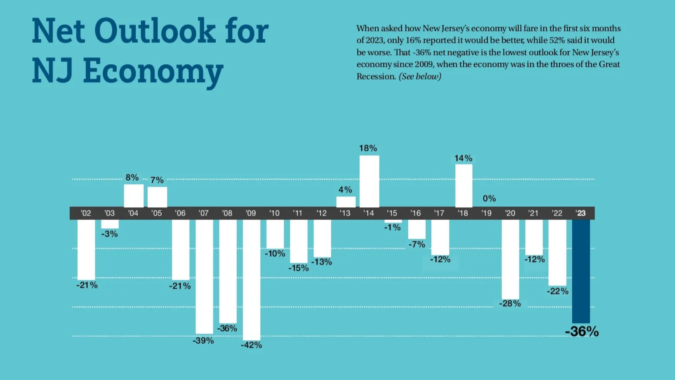 As a location for new or expanded facilities, only 23% listed New Jersey as very good or good, while 40% described it as fair, and 37% ranked it as poor.

Only 14% said they believe New Jersey has made progress over the last year in easing regulatory obstacles. That number has declined steadily from 24% in 2017.

When asked if their business had postponed installation of equipment or any expansion due to delays in permitting or a regulatory process, a concerning 27% said yes – which is 14% higher than last year.

Only 39% said they are planning to keep New Jersey as their domicile in retirement. That number is up 7% over the last two years, but still an indication of the state’s low appeal for people to experience their golden years.

Economic Outlooks
No two words have been more concerning for the business community in 2022 than “inflation” and “recession,” and the economic outlook on the state and national economy in this survey bears that out.

When asked how New Jersey’s economy will fare in the first six months of 2023, only 16% reported it would be better, while 52% said it would be worse.

That -36% net negative is the lowest outlook for New Jersey’s economy since 2009, when the economy was in the throes of the Great Recession.

Looking ahead, 56% said they believed the U.S. economy would perform moderately worse (40%) or substantially worse (16%) in the first six months of 2023.

Comparatively, only 16% said the U.S. economy would perform substantially or moderately better in the first half of next year.

That’s a -40% net outlook for the national economy, the lowest in this survey category in this century.