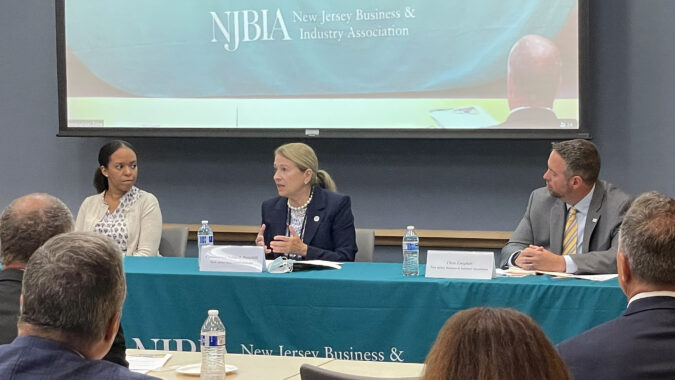 New Jersey Department of Health Commissioner Judith Persichilli spoke today at NJBIA headquarters about lessons learned since the COVID-19 pandemic, including the importance of workforce development in the public health sector.

“I don’t think I need to tell any of you what the last two and a half years were like,” Persichilli said. “One thing we learned is that the public health workforce at the state and local levels in New Jersey has been decimated for decades.”

She added that the department has since restored some funding and previously eliminated positions to the public health sector, however, creating a sustainable and robust workforce is still a massive work in progress, and the gaps were illuminated during the pandemic.

One such effort on this front includes the Centers for Disease Control and Prevention (CDC), which recently put out a grant which the DOH has responded to in the hopes of securing funding to add a director of workforce development to the entire public health sector.

“Workforce development is important to me and we are working on it here at the department,” the commissioner said. “One of the [toughest] jobs I had was being involved in staffing coordination and workforce development at a busy hospital. Trying to fill the gaps in skills and expertise and the requirements of what you need 24/7 – it made me want to pull my hair out.

“We need to rethink the way that healthcare workers work,” Persichilli said.

She also pointed to the importance of creating career ladders for public servants and public health professionals, which includes going to a vocational school, getting an Associate of Arts and Public Health degree at a community college, then a bachelor’s, master’s and eventually a doctorate degree.

“Helping people go through that ladder will give us a generation of individuals who will care to handle any crisis that may come in the future,” Persichilli said. “Nothing works from an office or a boardroom during a public health crisis. What works is boots on the ground.”

The highlighted need for a workforce overhaul isn’t the only lesson learned over the course of the past few years, as Persichilli said the state’s successful rollout of its wide-scale vaccination program was a valuable feat. It showed that the state is capable of administering more than 18.5 million vaccine doses within a short period of time.

She also said that the department learned about the overwhelming importance of transparent and constant communication and engagement with stakeholders.

“Any association that called, no matter how small or large, if they asked if they could get the commissioner on a call, I did it,” Persichilli said. “That served us very well, and it’s something that the department had really not done on a broad scale ever before. We will continue to do that.”

She said the department has also since developed a centralized data and reporting hub, allowing various sectors within the DOH to share data and analytics across departments in a more streamlined way.