Spending on Robotics, Drones to Double by 2023 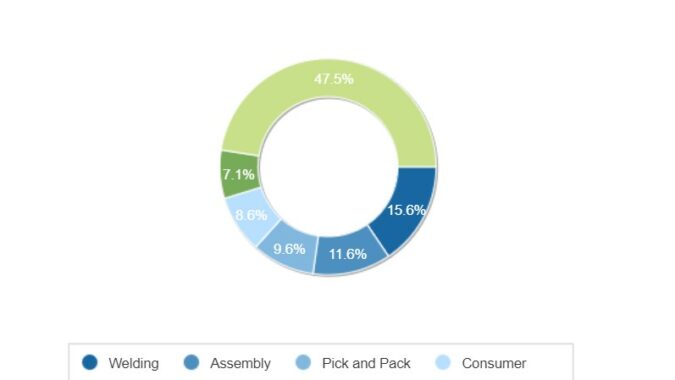 Worldwide spending on robotics systems and drones will be $128.7 billion in 2020, an increase of 17.1% over 2019, according to a new update to the International Data Corporation (IDC) Worldwide Robotics and Drones Spending Guide. By 2023, IDC expects this spending will reach $241.4 billion with a compound annual growth rate (CAGR) of 19.8%.

Hardware purchases will dominate the robotics market with 60% of all spending going toward robotic systems, after-market robotics hardware, and system hardware. Purchases of industrial robots and service robots will total more than $30 billion in 2020. Meanwhile, robotics-related software spending will mostly go toward purchases of command and control applications and robotics-specific applications. Services spending will be spread across several segments, including systems integration, application management, and hardware deployment and support. Services spending is forecast to grow at a slightly faster rate (21.3% CAGR) than software or hardware spending (21.2% CAGR and 15.5% CAGR, respectively).

“Software developments are among the most important trends currently shaping the robotics industry. Solution providers are progressively integrating additional software-based, often cloud-based, functionalities into robotics systems. An operational-centric example is an asset management application to monitor the robotic equipment performance in real-time. It aligns solutions with current expectations for modern operational technology (OT) at large and plays in facilitated adoption by operations leaders,” said Remy Glaisner, research director, Worldwide Robotics: Commercial Service Robots. “Equally important is the early trend driven by burgeoning ‘software-defined’ capabilities for robotics and drone solutions. The purpose is to enable systems beyond some of the limitations imposed by hardware and to open up entirely new sets of commercially viable use-cases.”

Discrete manufacturing will be responsible for nearly half of all robotics systems spending worldwide in 2020 with purchases totaling $53.8 billion. The next largest industries for robotics systems will be process manufacturing, resource industries, healthcare, and retail. The industries that will see the fastest growth in robotics spending over the 2019-2023 forecast are wholesale (30.5% CAGR), retail (29.3% CAGR), and construction (25.2% CAGR). 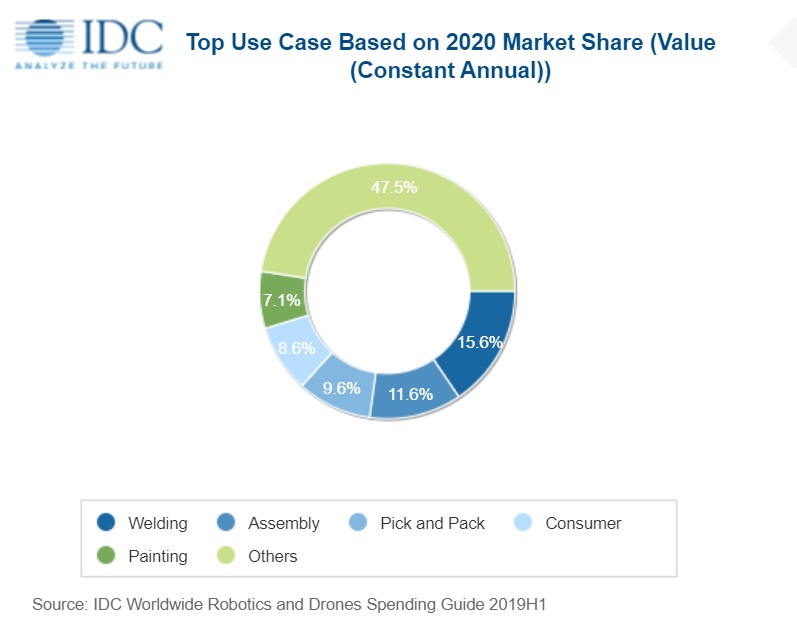 “Despite movement toward a trade agreement between the U.S. and China, it appears that tariffs may remain in place on many robotics systems. This will have a negative impact on both the manufacturing and resource industries, where robotics adoption has been strong. The additional duties will likely slow investment in the robotics systems used in manufacturing processes, automated supply chains, and mining operations,” said Jessica Goepfert, program vice president, Customer Insights & Analysis.

Spending on drones will also be dominated by hardware purchases with more than 90% of the category total going toward consumer drones, after-market sensors, and service drones in 2020. Drone software spending will primarily go to command and control applications and drone-specific applications while services spending will be led by education and training. Software will see the fastest growth (38.2% CAGR) over the five-year forecast, followed closely by services (37.6% CAGR) and hardware (32.8% CAGR).

Consumer spending on drones will total $6.5 billion in 2020 and will represent nearly 40% of the worldwide total throughout the forecast. Industry spending on drones will be led by utilities ($1.9 billion), construction ($1.4 billion), and the discrete manufacturing and resource industries ($1.2 billion each). IDC expects the resource industry to move ahead of both construction and discrete manufacturing to become the second largest industry for drone spending in 2021. The fastest growth in drone spending over the five-year forecast period will come from the federal/central government (63.4% CAGR), education (55.9% CAGR), and state/local government (49.9% CAGR).

“We expect to see some price increases as drone manufacturers pass on the cost of tariffs imposed on the import/export of drones. The construction and resource industries will particularly feel the effects of these price increases. In contrast, many consumer drone manufacturers have chosen against raising prices and are absorbing the additional costs in order to maintain supply and to satisfy continuing consumer demand for drones. While the pending trade agreement offers some hope, these industries will face continued headwinds as long as tariffs remain in place,” said Stacey Soohoo, research manager, Customer Insights & Analysis. “Elsewhere, robotics manufacturers will continue to face the one-two punch of higher costs for both materials and imported components.”

On a geographic basis, China will be the largest region for drones and robotics systems with overall spending of $46.9 billion in 2020. Asia/Pacific (excluding Japan and China) (APeJC) will be the second largest region with $25.1 billion in spending, followed by the United States ($17.5 billion) and Western Europe ($14.4 billion). China will also be the leading region for robotics systems with $43.4 billion in spending this year. The United States will be the largest region for drones in 2020 with spending of nearly $5.7 billion. The fastest spending growth for robotics systems will be in the Middle East & Africa which will see a five-year CAGR of 24.9%. China will follow closely with a CAGR of 23.5%. The fastest growth in drone spending will be in APeJC, with a five-year CAGR of 78.5%, and Japan (63.0% CAGR).

The Worldwide Robotics and Drones Spending Guide quantifies the robotics and drone opportunities from a region, industry, use case, and technology perspective. Spending data is available for more than 60 use cases across 20 industries in nine regions. Data is also available for 18 robotics systems technologies and 17 drone systems technologies. Unlike any other research in the industry, the detailed segmentation and timely, global data is designed to help suppliers targeting the market to identify market opportunities and execute an effective strategy.