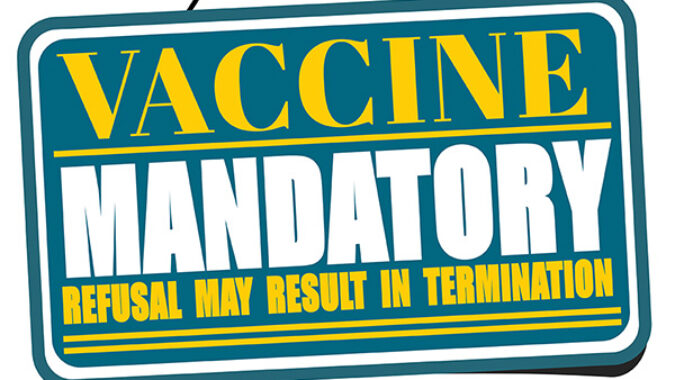 Everyone was talking about the nationwide vaccine-or-test mandate for private businesses of 100 employees or more, announced by President Joe Biden on Thursday. But less discussed have been the potential impacts on some businesses as they look to comply.

“There are obviously businesses which were already requiring vaccines or testing before Thursday’s announcement, and they decided for themselves that’s what they wanted to do,” said NJBIA President and CEO Michele Siekerka. “Others may even now have a sense of relief that a mandate is in place, rather than having to decide for themselves.

“With all that said, there may indeed be challenges for some employers as they lean into compliance. We hope our policymakers can recognize potential obstacles and step in to help those impacted businesses. It’s important that compliance assistance is provided to help businesses get over any hurdles, rather than a search for ‘gotchas’ in what is obviously a challenging time.”

Behind the mandate remains in an unprecedented hiring crisis for New Jersey businesses.

While smaller businesses, which are not yet mandated to require vaccines or tests, have been the most vulnerable in fulfilling staff needs, larger nonprofits and those in the healthcare and childcare industries could be further challenged with President Biden’s mandate and Gov. Phil Murphy’s Executive Order 252.

“If you think about it, employee attraction and retention in some of these areas are difficult enough, without a pandemic,” Siekerka said. “So you may have situations where employees who aren’t yet comfortable with getting a vaccine choose another industry or a business that is not subjected to mandatory vaccines or testing policies.

“With that, some employers and nonprofits may find themselves short on qualified workers that provide really critical work or essential services. And that will have an adverse effect on the public at large which rely on those services.

“We would ask the governor and Legislature to be mindful of these possibilities and, if prudent, include investments in workforce development targeted at impacted industries through the American Rescue Plan Act (ARPA) to combat work shortages.”

To help with the situation, NJBIA has been advocating for New Jersey policymakers to extend – or make permanent – temporary waivers issued by the state Department of Health allowing for greater flexibility and discretion in staffing and care delivery services – like telehealth – to help accommodate labor shortages.

NJBIA is also supporting a re-evaluation on the limitations on training programs and licensures to allow more flexibility in employment. As an example, allowing workers to receive dual licensure as home health aides and certified nursing assistants will benefit the nursing home, home care and hospice industries by expanding opportunities and talent pool for employers.

Siekerka said it was important to distinguish that not all businesses of 100 or more employers are huge corporations with comfortable budgets to accommodate the expense of months upon months of COVID-19 testing.

President Biden’s plan does call for $2 billion toward the production of 280 million rapid at-home COVID-19 tests and expands the federal government’s free testing program to 10,000 pharmacies in the nation. However, it isn’t known how long testing mandates will be in effect and those costs could eventually be put on the backs of business.

The other unknown is whether employees who are terminated as a result of refusing vaccination or testing will be eligible for unemployment benefits. If they are, so rises, presumably, a business’ unemployment tax based on its experiential rating.

“We hold that being terminated in this case constitutes a refusal to work and to comply with a condition of employment which has historically rendered employees ineligible for benefits,” Siekerka said. “So it is incumbent upon the governor and the Legislature to inform the public that a refusal to submit to these mandates will render them ineligible for unemployment benefits.”

New Jersey businesses are already in line for a $1 billion tax increase over three years under Gov. Murphy to replenish the state’s depleted Unemployment Insurance Trust Fund, despite the call from numerous lawmakers on both sides of the aisle to use federal recovery funds for that purpose, as most states have done.