Understanding the Consequences of Global Warming for NJ 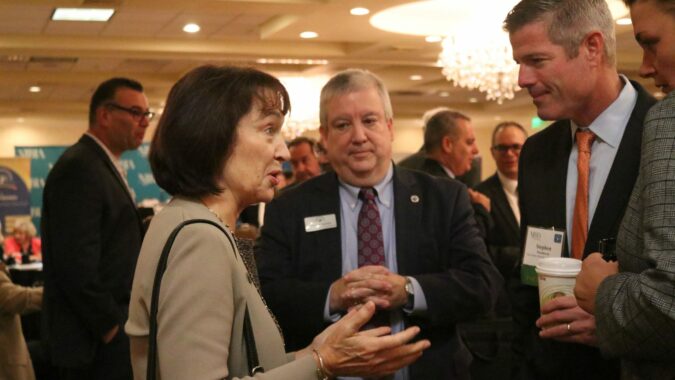 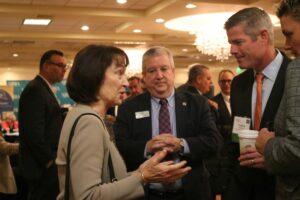 Gov. Phil Murphy’s ambitious and expensive plan to combat global warming presents broad policy directions for New Jersey. For Catherine McCabe, the commissioner of the New Jersey Department of Environmental Protection and one of a handful of top officials who have to figure out how to turn Murphy’s plan into reality, understanding the consequences of climate change is key.

That’s why the state is undertaking a thorough study of what will happen in New Jersey as temperatures and sea levels rise.

“For all of us, these effects of climate change present a real challenge, not only to our culture and our way of life, but also to our economy as well as to our environment,” McCabe said.  She explained that the state is undertaking a thorough study, much of it using existing research, to map out what New Jersey’s future will look like. She expects the report to be ready this fall.

Speaking at NJBIA’s Meet the Decision Makers event this morning, McCabe gave a detailed assessment of the state’s multi-prong approach to reducing greenhouse gas emissions to achieve the governor’s vision. While NJBIA supports the governor’s broad goal of 100% clean energy by 2050, the association has been critical of the draft Energy Master Plan for not considering the costs of many of the clean energy initiatives it is advocating.

The debate over global warming, however, doesn’t really impact what McCabe does. Her job is to figure out how to get New Jersey’s carbon emissions down to zero.

At this morning’s briefing, she extolled the benefits of wind energy, explained the need for greater use of electric vehicles, and said nuclear energy would remain an important part of New Jersey’s electricity generation system.

The nuclear energy component, for instance, is especially important. She said the governor is taking a chance on the continued viability of nuclear power because it generates about 40% of New Jersey’s electricity, all without any carbon emissions.

Offshore wind also offers the promise of carbon-free energy, but it’s still a ways off from providing it. The first phase of offshore wind has been approved, but before turbines go up off of New Jersey’s Atlantic coast, numerous environmental issues need to be resolved. Once offshore wind gets the go-ahead, though, McCabe sees New Jersey getting a lot more than electricity out of it.

“The offshore wind industry in New Jersey is very exciting opportunity for our state, not only to reduce our greenhouse gas emissions from the power sector, but really, to add a whole new sector to our economy,” McCabe said.

In her vision, New Jersey will leverage its resources in wind energy to create new businesses providing products and services for what many anticipate will be a growing source of energy nationally in the near future. Her department is working with the state Board of Public Utilities and Economic Development Authority to ensure the assembly plants making the turbines are located in New Jersey.

“All of the states are vying for their share of the economic pie, and we’re right in there with them,” she said.

There are also possibly new lease areas coming that are farther out to sea, but New Jersey is waiting on the federal government to determine exactly which areas will be designated.

“This is going to be in our future for a long time,” McCabe said. “Certainly, we can expect to see incredibly robust building for offshore wind in the future.”

When it comes to greenhouse gas emissions, however, the transportation sector is the big one. It is the leading source of greenhouse gases in New Jersey, so DEP is promoting the use of electric vehicles as a way to start tackling the problem.

In fact, McCabe’s appearance coincided with New Jersey’s “Drive Electric Week” to promote greater use of electric vehicles. DEP has been holding a series of events providing consumers with free test drives of electric sedans and SUVs to show how viable EVs are.

That’s not to say DEP is lacking for milestones. Thanks to $27 million in grants handed out in February and June, New Jersey now has over 900 charging outlets at more than 300 locations statewide. It’s also looking to double the number of outlets with the next round of funding.

DEP is also setting the example. Now that the Department of Treasury has added electric vehicles to state purchasing contracts, McCabe said, DEP was able to replace four of its gas-powered minivans with hybrid plug-ins.

The agency is also looking at the possibility of a cap-and-trade program for vehicle emissions, but no decision is pending on that at the moment. New Jersey has been working with the Transportation Climate Initiative, which she said is a consortium of Northeast states led by the Georgetown Climate Initiative, to gather information.

“Since last year, we’ve been back at the table to try to listen and learn,” McCabe said. “The group is still very much in the design process” to determine if this idea could work. The group is expected to come out with some specifics soon, she said, and then New Jersey could better determine if it wants to join.

“No decision yet, there, but we’re participating so that we’re fully informed,” McCabe said.