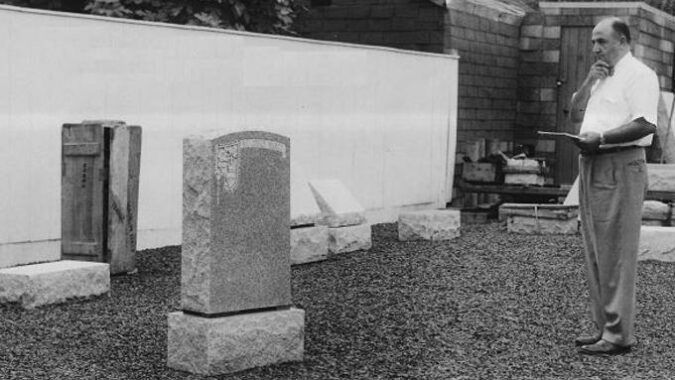 As a young boy in 1915, Edward DePaola emigrated from Italy to pursue the American Dream. In 1950, he made this dream a reality by starting DePaola Monument Company in Newark, which remains in business today almost 70 years later and is a long-time NJBIA member.

DePaola Monument Company makes granite and bronze grave markers and memorials to the departed. The key to success was the early reputation Edward established for his craftsmanship and his compassion in dealing with families who had lost a loved one.  It’s a family business, with son Edward R. DePaola joining him in 1957, followed by his grandson, Thomas DePaola, becoming the third generation to come aboard in 1989.  Today, Thomas leads the company as president.

Along the way, the company established a branch location in East Hanover in 1965.  They have a staff experienced in all aspects of monument making, which includes employees with well over 30 years’ experience in cutting lettering, both on site at cemeteries or in the sandblasting shop.  If an appointment at one of their locations is not convenient for a potential customer, they are more than willing to go to their home to discuss the memorial work.

When it comes to ways to recognize loved ones, monuments offer many options.  Let’s start with markers: They can be done in bronze for a very distinguished look, or in granite, which offers a variety of colors.  Granite markers can either be flat or on a slant, which is often just a personal choice.  A monolith is a one-piece headstone that is attached directly to the cemetery foundation.  It can be used to cover a single grave or for two or three burials and usually range between 2’6” and 2’9” in height.

A single monument consists of two pieces of granite: the upright piece called the die and the horizontal piece called the base and is used to cover a single grave.  The standard height requirement is usually 3 feet.   Double and large family monuments are also available to accommodate two or more burials.

A mausoleum is an external free-standing building constructed as a monument. These are usually custom built to specifications and most use a granite exterior and a granite or marble interior.  FYI, another type of mausoleum is called a sarcophagus, which is an above ground crypt usually for two burials.

Some cemeteries allow benches to be placed on the plot or even used as the main headstone.  When used as a main headstone, foot markers can be used to designate individual graves.

Finally, there are many accessory options, such as vases or eternal lights, which can be used to personalize a memorial and enhance the appearance of the monument.

Know that different cemeteries often have slightly different requirements.  For example, some only allow markers on the main headstone and have base and height regulations.  Regardless, DePaola is aware of all this and can accommodate whatever is needed. Ultimately, they will provide a lasting memorial that will be cherished.

Congratulations to the DePaola family for their long-term success and to being able to truly capture the American Dream.  Visit their website for more information.

The DePaola Monument Company is just one of 20,000 companies that comprise NJBIA’s membership, which is very diverse with representation from an amazingly large and wide spectrum of fields, industries and professions. Look for more unique stories about NJBIA members in future issues of “Beyond 10 West Lafayette,” NJBIA’s membership blog.