Beyond Showing Up: 3 Women Share Lessons Learned on the Way to C-Suite 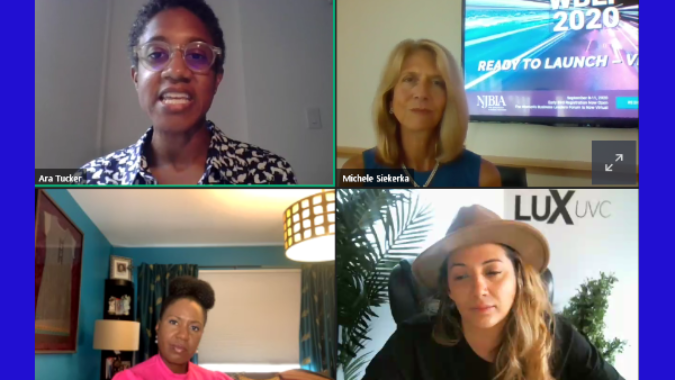 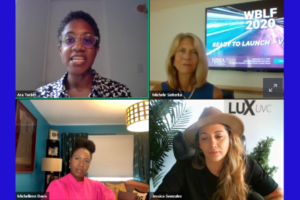 Wednesday’s NJBIA Women Business Leaders Forum featured what has become a highlight of the annual event—TED-style talks by women who have worked their way to the C-suite. And even though they delivered their talks virtually instead of in a ballroom filled to capacity, the three speakers still delivered.

Bring Every Aspect of Your Life with You

The idea that success is only possible for those who “show up” is not a new one. For Davis, that means going beyond her time as State Treasurer, the head of a major hospital system, and an attorney with a bunch of college degrees on the wall. She also brings the girl who grew up in Camden, the most dangerous city in the whole country at the time.

“I love to bring—to this time together with you as well as to everything that I do—the lived experience; that aspect of each of us that is so all-important; making certain that we are not leaving on the shelf the fact that we may have grown up in a certain environment that may be unique and different from others; the fact that we bring a lens to the work that we do that is not like everybody else’s.”

Like everybody else, Davis has had to overcome self-doubt and negative talk as she navigated her career amidst a divorce and the deaths of loved ones. She has moved up the ladder while assuming the primary care-giving role duties for both her children and her aging mother. And she reminded viewers that when women show up at Zoom meetings ready and prepared, they are also simultaneously assuming the roles of principal and teacher to their children during the pandemic.

So why go through all of that?

“I’ve been ‘the first’ and ‘the only’ a lot in my career, and you’ll see that when you look at the bio. But none of that matters if we are not ensuring that there is a space that is open for others to follow,” Davis said.

Jessica Gonzalez, still in her 20s, is both following that path and blazing a few new ones herself.

Gonzalez is a classic “by-her-own-bootstraps” entrepreneur. Ten years ago, she had sold everything she owned and moved in with her parents to develop a company called Incharged, which provides special kiosks at trade shows that allow vendors to charge their phones while continuing to display their brand and advertising on the units.

She hired an engineer to develop the product and a salesperson to get it to market, and received funding from Newark Venture Partners. She was half-a-million dollars in debt, but the events industry was going strong and her company was poised for success.

“And then COVID hit, and the events world stops completely,” Gonzalez said.

She could have retreated, and just waited for the pandemic to pass. But fear of being able to provide for her two children as an LGBTQ mom propelled her to action. She spent mornings and nights in her basement trying to figure out a new product that would help people get back to their offices and get back to normal life.

That product became Lux UVC, an ultraviolet light kiosk that can disinfect large spaces. In the last two months, it’s been successful enough to pay off her entire debt and bring back her employees.

“Even though it’s scary, it’s a time of uncertainty, you can always regain control of what’s happening within yourself and your organization,” Gonzalez said. “The only thing I could do is keep working, and keep working hard.”

Don’t Run Away, Run Toward Something

Ara Tucker, a self-described “recovering lawyer,” knows what she wants out of her career now, but she had to go through a lot of unsatisfying work to figure out what that is. So this year’s Women Business Leaders Forum theme, “Ready to Launch,” speaks to her as she has come to see her career as a journey.

“At any given time, you could be launching, growing, broadening, shifting, or advancing. It’s really less about the ultimate destination and more about what you experience and contribute along the way,” Tucker said.

Her contribution Monday was three lessons.

Lesson 1. Don’t run from something, run toward something. She described the good job she had at a global law firm but it left her unsatisfied, while her girlfriend, working harder at a different kind of job and making a lot less money, was filled with pride and purpose. So Tucker began to search for what she really wanted to do, what she wanted to run toward.

Lesson 2. What you do doesn’t define your purpose. That’s up to you.

Tucker found her dream job—a position in the Provost’s Office of Princeton University, her alma mater—but it paid about half of what she was making at the law firm.

“Was I crazy to walk away? Most of my friends and family thought that I might be,” Tucker said. But she did succeed in finding her purpose, which she now describes as helping mission-driven companies to empower people to change the world.

A few years and one Great Recession later, the landscape had changed, and Tucker found herself returning to the law firm she had left, but this time, as the first head of diversity and inclusion.

Lesson 3. Live out loud, even if you’re an introvert. Tucker describes herself as someone who thinks before speaking and is more comfortable developing deep relationships with a few people rather than in large groups.

There are different ways to be seen and heard, which in Tucker’s case, turned out to be her natural ability as a writer. She created a website where should could share her experiences and successes and used other online platforms to be parts of larger conversations.