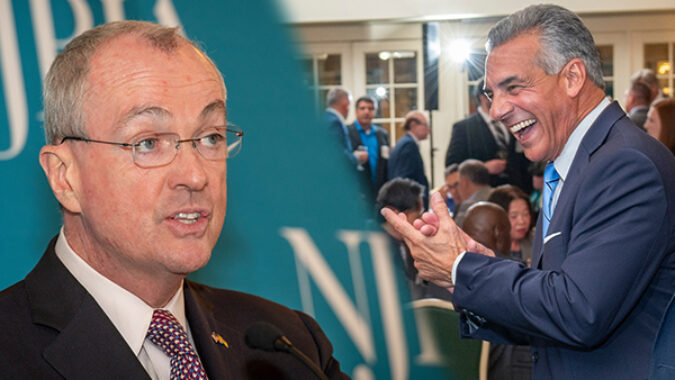 In a sense, they both come from business backgrounds.

Gov. Phil Murphy, a 23-year career as a financier with Goldman Sachs; former Assemblyman Jack Ciattarelli, an accountant-turned-owner of a medical publishing company.

But as voters head to the polls on Tuesday to choose the incumbent or challenger as New Jersey’s governor for the next four years, the difference on how each candidate will apply their experiences to lead the state’s economy are stark.

“There’s no question both Governor Murphy and Jack Ciattarelli want what’s best for New Jersey and its economy,” said NJBIA President and CEO Michele Siekerka. “But they have very different pathways to get there.”

Both gubernatorial candidates preach that small business are the backbone of New Jersey’s economy. But Murphy, a Democrat, extolls the virtues of “stronger and fairer” as the foundation for a brighter economic future, which has resulted in higher wages and increased worker protections.

Ciattarelli, a Republican, believes mandates and the high cost of doing business in New Jersey strike at its regional competitiveness.

“It pains me greatly that year after year after year, New Jersey is ranked as one of the worst places in the country to do business,” Ciattarelli said at an NJBIA Employer Legislative Committee event over the summer. “We can’t have that. It needs to change.”

There’s no question some of Murphy’s biggest priorities – all achieved in his first term – presented challenges to some in the business community.

Raising the minimum wage to $15 an hour by 2024; implementing a millionaires’ tax; guaranteeing earned sick leave and expanding paid family leave for all workers.

And the governor makes no apologies for any of them.

But Murphy also has put forth a new economic incentive program, albeit long delayed, that is starting to bear fruit. Murphy told the audience at NJBIA’s ELC meeting that the New Jersey Economic Recovery Act of 2020, signed earlier this year, is “building on the framework of a stronger and fairer economy that works for both our residents and for our businesses.”

Murphy called the program “a game changer in our efforts to make the state a global center for innovative new businesses working at the leading edge of the future economy.”

Ciattarelli has his own plans to help boost business, while helping them save. Among them: Reducing the corporate tax rate from national-high of 11.5% to 5% over five years; exempting the first $50,000 in small-business income from taxes; Eliminating taxes on the sale of a family-owned business; and reducing the income tax rate on the state’s highest earners by 30%.

He’s also a proponent of “super-sizing” a minimum-wage payroll deduction.

“You get to deduct $1.10 for every $1.00 of minimum wage payroll,” Ciattarelli told New Jersey Business magazine. “This lessens the tax obligation to better afford the higher payroll and payroll taxes that were forced upon businesses by increasing the minimum wage.”

Property taxes are still a top consideration of business owners, as well as New Jersey residents.

According to the Tax Foundation, New Jersey’s average property tax bill is $9,100 – the highest in the nation. That’s a 4% increase since when Murphy took over. The governor has contended that his increase in state education aid through the state’s funding formula – nearly $9 billion – decreases the pressure for local governments to raise property taxes.

Ciattarelli has campaigned on ceasing the current school funding formula to go with something more equitable, citing how expensive homes in cities like Jersey City and Hoboken have lower property tax rates than smaller homes suburban towns throughout the state, like Toms River, Bridgewater or Parsippany.

Under Gov. Murphy, New Jersey has seen its state budget balloon 30% since Gov. Chris Christie’s last budget four years ago. In fact, the $46.4 billion budget for FY22 signed by Murphy in the spring was 15% more than the previous year’s record budget.

Murphy defends the budget increases as necessary, viewing the Christie budgets of the previous eight years as too stringent.

He is also quick to note that the FY22 budget included a record $6.9 billion payment to the state’s often neglected public-worker pension fund, an increase in school formula funding and $500 rebates for households with income below $150,000 and at least one child – as part of the deal with the Legislature to institute a millionaires’ tax.

When asked about that tax relief during NJBIA’s ELC event, Ciattarelli said that it was “temporary.”

He has previously promised to reduce $10 billion in spending from the budget by sitting down with the Legislature on “Day One.”