What a Celebrity Chef from L.A. Can Teach NJ Business Women 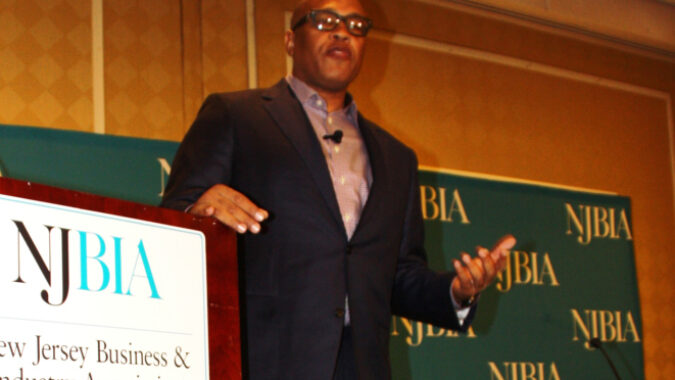 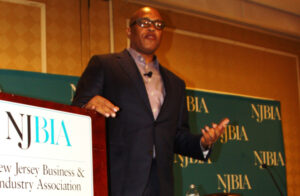 What can a convicted drug dealer turned celebrity chef from California tell business women from New Jersey about breaking into the top positions in the corporate world?

Quite a bit, it turns out.

Jeff Henderson, a.k.a. Chef Jeff, grew up on the streets of South Central L.A. and San Diego, wound up in prison, where he learned to cook, read and, in his words, “grow up.” Through determination and resilience, he worked his way up through some of the top restaurants on the West Coast to become the first African-American executive chef at the Bellagio Hotel and Casino in Las Vegas.

“I thank God every day that I lived and survived the streets, and 10 years in prison, and also that I survived corporate America,” he told a crowd of over 300 at NJBIA’s Women Business Leaders Forum on Friday. “Believe it or not, that was just as tough and gangster as the streets sometimes.”

So what advice could he give women in their careers?

Or this: “Sometimes we have to chameleon-ize our approach to build strategic relationships and get certain access to power, to prestige, to the seat at the table.”

Check out the photos from the Women Business Leaders Forum here.

Or this: “Sometimes during the darkest period in our lives, whether it’s an organization, your company, or you personally, during that dark moment is when you have that epiphany.”

Henderson’s darkest moment came in prison, where he was serving a 10-year sentence for conspiracy to sell crack cocaine. His epiphany was that he already had the God-given gift of business acumen. He is quick to assert that it’s a part of his life he is not proud of. But as a drug dealer, he learned the science behind making the sale, and how to use marketing and branding on the street, even if he had no idea what those terms meant at the time.

Because he was convicted of a federal crime, he served in federal prison with the likes of wealthy investors Michael Milken and Ivan Boesky, people he calls “the Wall Street guys.”

“It was in prison with the Wall Street guys who I became friends with, who introduced me to 60 Minutes, and 20-20 Prime Time, who put the Wall Street Journal and USA Today in my hands every single day, where I was able to take flight from prison and expose myself to the world and begin to understand politics, government, society, the haves and the have-nots,” he said. “I began to understand what makes people successful, and what makes people live in generational poverty.”

He realized he was the same as his Wall Street friends. They just had a different product and conducted business a little differently.

He became the top inmate cook in prison and learned that he had a knack for it. He then was inspired by a magazine article about the top black chefs in America. At the time, it was Patrick Clark, Marcus Samuelsson, and Robert Gadsby.

When he got out, he went to work washing dishes for Chef Robert Gadsby at 672 Wilshire and La Brea. That’s where he learned to look, talk, dress and act like a chef. He emulated Gadsby, shaving his head (Gadsby is bald), whitening his teeth, getting manicures, and being well dressed.

It also took a ton of hard work—getting in earlier than the others, staying late, always trying to learn something new.

“I sometimes draw a parallel between women or minorities or formerly incarcerated people,” Henderson said. “We have to be twice as better, sometimes three times as better.”

Now it’s about giving back, because that is what people will remember.

“It’s going to be for the ones’ we reach back and help carve out their own version of the American dream,” he said, “because everyone in this room has the position and has gotten where they are because somebody they knew gave them opportunity. You built the right relationship that created an opportunity for you to be here.”