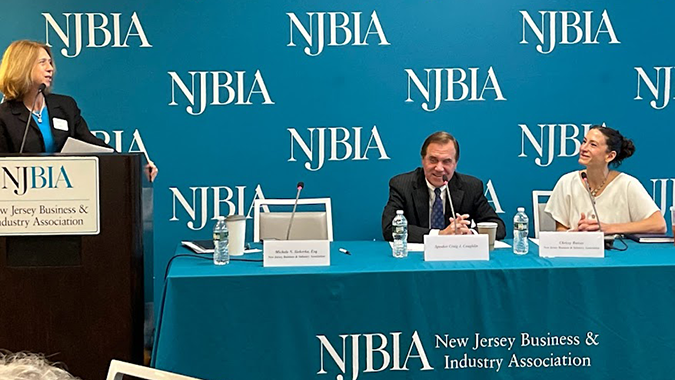 On Wednesday, NJBIA hosted Assembly Speaker Craig Coughlin, who shared his thoughts on Gov. Phil Murphy’s proposed $48.9 billion budget for FY23, as well as some of the most pressing issues for businesses and the state, including unemployment insurance, childcare, tax relief and affordability.

The New Jersey Legislature has until the end of this month to approve the budget, and it has been well-documented that the state is in the unique position of being flush with record tax revenues.

New Jersey Treasurer Elizabeth Muoio has said that her department expects the state to collect $51.4 billion before the fiscal year ends June 30. That is more than $9 billion higher than initial estimates last summer and about $13 billion above the pre-pandemic peak in 2019.

“Everybody sees this as an opportunity to do something transformative and do something that they’ve never had a chance to do before,” Coughlin said at NJBIA’s “Meet the Decision Makers” event held in Clark.

He added that one goal is to have the biggest tax relief program in the history of the state of New Jersey.

In terms of budget specifics for small businesses, Coughlin cited an additional $50 million for the Mainstreet Recovery Program, as well as continued funding for Black and Latino seed funding, and $500,000 for small business bonding readiness.

On unemployment insurance, the speaker said that a few things have already been done to aid businesses.

“We have already artificially lowered the rate, and eliminated the pandemic years from the calculation,” Coughlin said.

He also pointed to a bill (A-3683) currently working its way through the Legislature that includes $375 million in tax credits to help more than 70% of New Jersey businesses pay for scheduled unemployment insurance tax increases.

“The emphasis there was on small business and the people who were most challenged by the impact of unemployment insurance,” he said.

Coughlin also spoke to the importance of lifting up the childcare industry.

“We all recognize that childcare is a critical element to getting the economy back in full swing,” he said. “I have a bill to create about 1,000 new childcare seats, and we are also working on legislation that would extend the enrollment basis for payment of childcare centers through the end of the year.

“I know we get a reputation as not being business friendly – I don’t think that is true,” Coughlin said. “I can tell you personally from hours of conversations with my colleagues that business concerns are always at the top of the list. We recognize that there is no way the state is successful without a successful business community.”