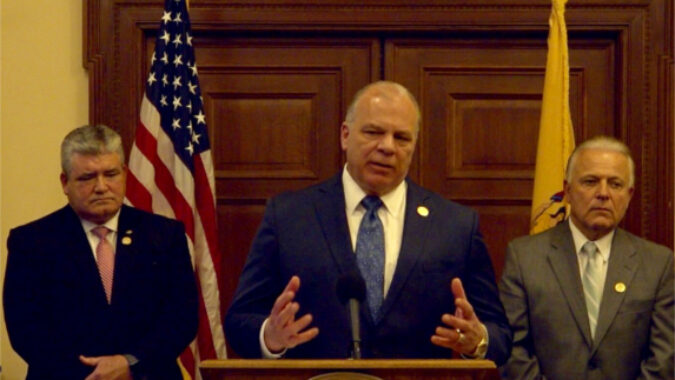 Senate President Stephen Sweeney today took the first concrete action to address the state’s structural financial problems, unveiling a package of bills that would significantly cut public employee pension and health benefit costs, and potentially reverse the dangerous course of out-of-control spending New Jersey has been on for over the last 10 years.

Sweeney has been championing his “Path to Progress” reforms for much of the year, and NJBIA has strongly supported many of the same ideas. Today’s bill introductions are the first steps toward making them a reality.

“If we fail to act, property taxes will continue to go up, and pension, health benefits and debt service will continue to eat up every penny of state revenue growth over the next three years,” Sweeney said. “We need to have the courage to make the right decisions and take the actions that are best for New Jersey’s future.”

“New Jersey, more than ever, needs to act with a reform agenda that comprehensively addresses underfunded pensions and the right-sizing of health benefit costs,” said NJBIA President and CEO Michele N. Siekerka. “If we’re to ever make this great state more affordable and competitive, and not address our growing deficits with increased taxes, the time is now.”

In essence, the bills would:

The reforms face an uncertain future, despite the show of support from both parties and both houses of the Legislature. The proposals face widespread opposition from public employee unions, teachers and other interested groups.

But the impetus for the reforms is unmistakable. NJBIA has pointed out that over the past 10 years, state expenses have significantly outpaced state revenues, and state debt has ballooned by 382 percent. (See NJBIA Analysis of Budget Increases Points to ‘Financial Cliff’.­)

“NJBIA has long called for a comprehensive reform agenda to address the structural challenges that have hindered our great state’s ability to be more affordable and regionally competitive,” Siekerka said. “We appreciate Senate President Sweeney’s commitment to structural reforms that are desperately needed in order to provide New Jersey with a pathway for a fiscally sound and sustainable state budget in the future.”