Murphy Administration Releases Half of Spending Placed in Reserve 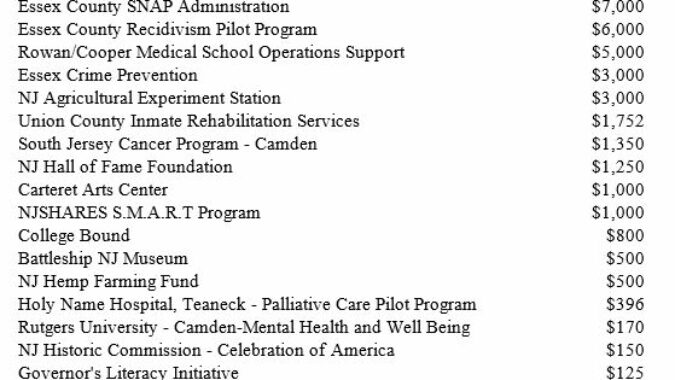 The New Jersey Department of the Treasury today released $114 million of the $235 million in spending that had been placed into reserve in July to help maintain a balanced budget and a responsible surplus pursuant to Executive Order No. 73 signed by Governor Murphy.

The Executive Order (EO) was deemed necessary after the Fiscal Year 2020 (FY 2020) budget sent to the Governor included up to $235 million in unassured savings items and additional spending initiatives outside the budget that were not adequately funded.

Consequently, the EO authorized the Director of Treasury’s Office of Management and Budget (OMB) to place items of appropriation into reserve in an amount sufficient to ensure that the state budget remains in balance while maintaining a responsible surplus balance and protecting the state’s Rainy Day Fund deposit.

Additionally, the EO authorized the OMB Director to release items of appropriation from reserve upon notification from the Treasurer that amounts in excess of the targeted fund balance are anticipated to be available for expenditure.

After careful review of the first quarter of FY 2020, it has been determined that $114 million in spending is appropriate for release based on a number of factors, including an improved year end fund balance for FY 2019; and the expectation that approximately $50 million of the $235 million that the Legislature booked in the budget will be achieved through the Administration’s efforts, such as the recent announcement of $13 million in savings through the consolidation of Department of Correction youth facilities.

As a result, the OMB Director has authorized the release of the following funds today: 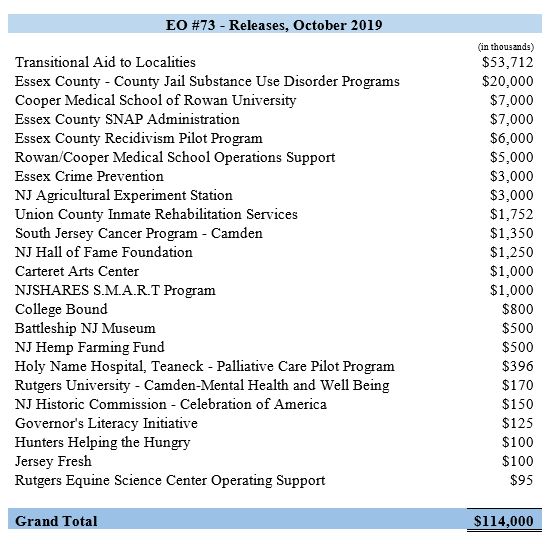 “I am pleased that we are able to release a significant portion of the funding that had been placed into reserve this summer,” said State Treasurer Elizabeth Maher Muoio. “We will continue to closely monitor revenue collections and additional savings initiatives booked in the budget and hope to be able to release additional funds as expeditiously as possible. In the interim, we have asked all state departments to continue to keep us apprised of any potential financial hardships on the horizon in relation to spending items placed in reserve.”

The funds being released were selected using the same criteria laid out in the Governor’s EO, which include, but are not limited to:

Pursuant to the EO, the Treasurer will continue to monitor whether other savings initiatives materialize, and take into consideration monthly revenue collections and other factors, in order to ensure a responsible Fiscal Year 2020 fund balance.

The Treasurer and the OMB Director are also authorized to place additional appropriation items in reserve throughout the fiscal year if the conditions that necessitated the EO persist.