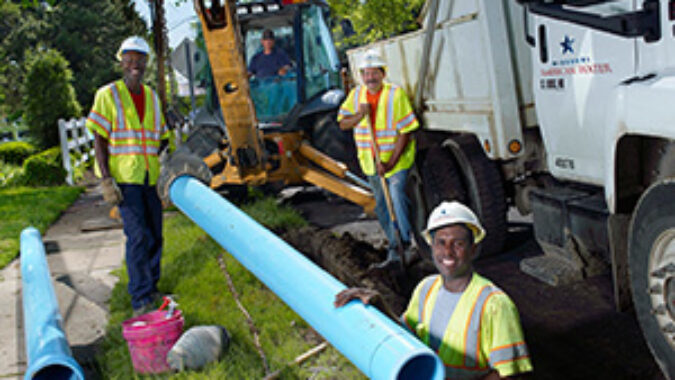 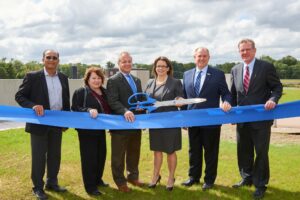 The New Jersey American Water  on Monday celebrated the completion of a significant, long-term flood protection project at its Raritan-Millstone Water Treatment Plant with a ribbon-cutting ceremony on the grounds of the plant. This $37 million project will help ensure the water supply at the plant is protected from the increased risk of flooding during extreme weather events while maintaining a sustainable water supply for more than 1 million people in the central New Jersey region.

“Today is the result of countless hours of planning and 18 months of construction made possible by hundreds of professionals who came together to make our vision of protecting this facility a reality,” said Deborah Degillio, president of New Jersey American Water. “We have fortified this critical infrastructure in order to provide clean, safe, reliable water service – not only to our customers in Central New Jersey who rely on us every day, but also the millions of residents throughout the state we help during emergency situations.”

The Raritan-Millstone Water Treatment Plant, situated in Bridgewater, Somerset County, N.J., is New Jersey American Water’s largest water production facility and a regional source of potable water supply for all or parts of seven counties in central New Jersey. The plant produces an average system delivery of 132 million gallons a day (MGD) and is capable of peaking at 190 MGD. As a Tier 1 New Jersey Office of Homeland Security & Preparedness facility, the Raritan-Millstone facility is also considered “Critical Infrastructure” by the federal Department of Homeland Security. Water supply from the plant is also provided to five large bulk water sales connections, and two Critical Regional Emergency Interconnections – the cities of Newark and Trenton.

The plant is located near the confluence of the Raritan and Millstone Rivers – an area of Somerset County that experiences severe flooding during significant storm events due to the relative low ground surface elevations in the floodways adjacent to the two rivers. Prior to the $37 million investment project, the earthen berms and north side reinforced concrete flood wall surrounding the plant were previously designed to provide flood protection for a 100-year flood event, which is marked by an elevation of 44 feet. The system of flood protection had been tested three times in recent years, with peak flood water levels recorded within inches from the top of the berm/wall.

With the completion of this project, the entire floodwall system at the plant has now been raised by four feet to an elevation of 48 feet, which is the level of flood resiliency supported by the U.S. Environmental Protection Agency and the Army Corp of Engineers. The raising of the floodwall now provides flood protection from storm events up to 500-year recurring frequency. In addition to raising the plant’s north reinforced concrete floodwall, the earthen berms in the northeast and west have also been raised and widened, additional reinforced concrete flood walls have been constructed, new flood gates have been installed and drainage mechanisms have been improved.

To complete this significant project, New Jersey American Water contracted with AECOM for design engineering and KC Construction Inc. as the general construction contractor. The majority of the cost of raising the floodwall, which amounts to approximately $27.2 million, is being funded through low-interest financing from New Jersey Infrastructure Bank in partnership with the New Jersey Department of Environmental Protection.

New Jersey American Water, a subsidiary of American Water, is the largest investor-owned water utility in the state, providing high-quality and reliable water and/or wastewater services to approximately 2.7 million people. More information can be found at www.newjerseyamwater.com. With a history dating back to 1886, American Water (NYSE: AWK) is the largest and most geographically diverse publicly traded U.S. water and wastewater utility company.  The company employs 6,800 dedicated professionals who provide regulated and market-based drinking water, wastewater and other related services to an estimated 15 million people in 47 states and Ontario, Canada. More information can be found by visiting www.amwater.com.