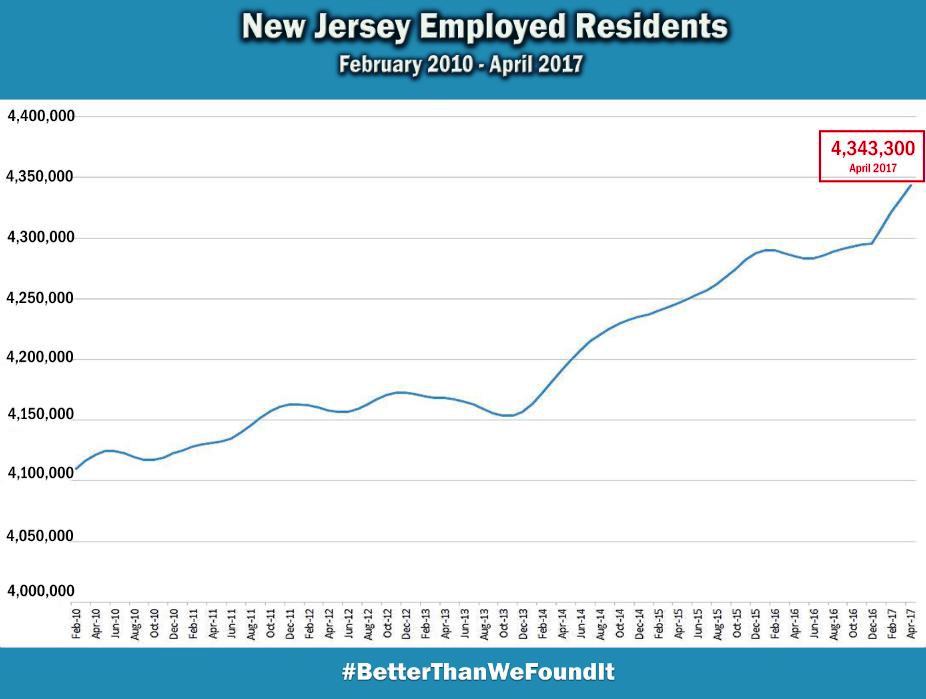 Governor Chris Christie’s two terms of pro-growth policies are continuing to pay off at record levels for all New Jerseyans. Employers are starting and growing businesses in the Garden State thanks to the Governor’s fiscally responsible state budgeting, commonsense regulatory reforms, pro-jobs tax cuts, small business investments, a historic infrastructure improvement plan and the first broad-based tax relief for all residents since 1994.

According to the latest federal data, 313,400 new private-sector jobs have been created for New Jerseyans since the February 2010 recessionary low point, including 55,900 jobs over the past year (April 2016 to April 2017). Additionally, new Treasury data shows New Jersey is well on pace for its seventh-straight year of increased new private-sector business filings under Governor Christie.

In April, New Jersey employers added 1,900 private-sector jobs for an average of 3,725 jobs per month thus far in 2017, while the state’s unemployment rate dropped to a 16-year low of 4.1 percent, below the national rate of 4.4 percent, according to preliminary data from the U.S. Bureau of Labor Statistics (BLS). Additionally, the BLS’s monthly household survey showed another record high level of 4,343,300 New Jerseyans employed, up from the 4.32 million record revealed in the March survey.