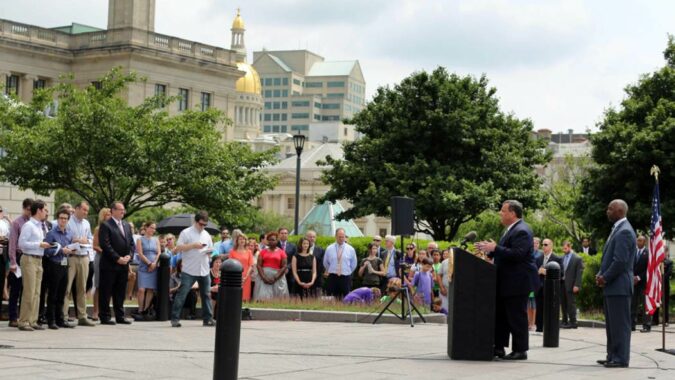 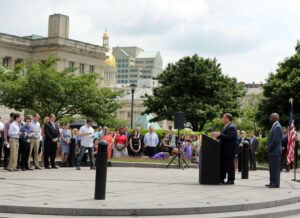 During a news conference with the mayor of Trenton, business and community leaders, and a host of state and county officials, Governor Chris Christie today announced an initiative to build a new park along the Delaware River and connect it to downtown Trenton with a pedestrian bridge over Route 29.

NJBIA President & CEO Michele Siekerka attended the news conference and afterward applauded the collaborative efforts of the Governor, Trenton Mayor Eric Jackson, civic groups and the state Department of Transportation (DOT) and Department of Environmental Protection (DEP) to make this latest urban revitalization project a priority. Siekerka noted the same type of collaborative approach was used successfully in the City of Camden to accomplish a series of water infrastructure projects to successfully control flooding while at the same time give the city’s residents new parks and open spaces.

“This new Trenton collaboration is using the same business model and involves similar partnerships to reconnect the city’s residents with their waterfront,” Siekerka said. “We need to shine a light on collaborative initiatives such as this that are going to really have a positive impact on the city.”

The initiative will incorporate work from both the DOT and DEP in a dual project to facilitate a more attractive destination spot in New Jersey. The DOT will use an estimated $15 million in Transportation Enhancement funds to construct a pedestrian walkway bridge from the roof of the State House parking garage over Route 29 to a 4.5-acre strip of land that will be developed into a park by the DEP.

The DEP will use an estimated $3.5 million in Natural Resource Damages funds to pay for the development of Trenton Falls Park, which will include upgrades such as planting, paths, and lighting. Through signs and wayfinding, the new riverfront park will connect to several downtown destinations, including Stacy Park to the north, Mill Hill Park, and the site of Assunpink Creek daylighting.

Last month, Governor Christie announced a number urban renewal projects in Trenton to make the city a safer place to live and work by providing city police more tools to do their jobs. The projects include an $11.5 million Urban Blight Reduction Pilot Program that will demolish approximately 400 to 500 vacant, abandoned and blighted properties in Trenton in an effort to increase public safety and spur positive redevelopment of those sites. There are approximately 3,000 abandoned structures in Trenton, many of which are magnets for criminal, gang and drug activity.

This program, to be funded through the New Jersey Housing and Mortgage Finance Agency, will strategically target residential and limited commercial demolition to help stabilize neighborhoods.

Governor Christie’s plan also includes $786,000 to install a maximum 150 surveillance cameras that will be strategically located to increase the strength and efficiency of the city’s central monitoring system and improved street lighting. For the latter project, the Board of Public Utilities will fund and coordinate an audit of the 5,000 to 6,000 street lights in Trenton to determine the design and implementation of an improved lighting system, with a focus on high crime areas.