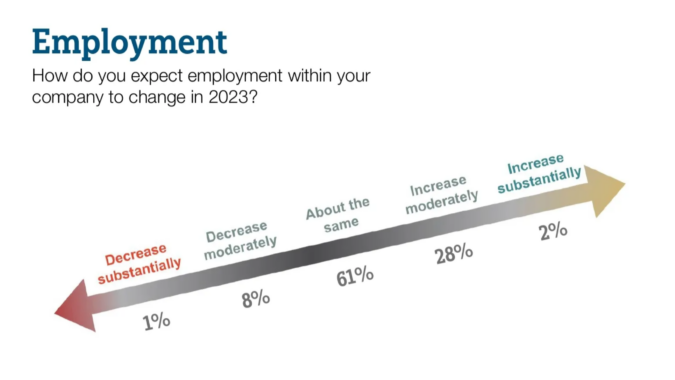 Today, we look at deeper at the staffing, employment and wages data found in this year’s Business Outlook Survey.

Staffing
Those who said they struggled to hire were asked to list the top three factors that most affected their ability to find appropriate staffing.

Most (79%) said there were not enough candidates or applicants to fill open positions, while 59% said candidates lacked the required skills or qualifications.

Further down the list, 35% said they were unable to provide the requested compensation or benefits, while another 28% reported faster-than-typical employee turnover.

As for impacts that went along with hiring challenges, 61% said they increased wages, 59% said their available staff was more stressed or burnt out and 45% said they lost revenue.

Another 38% said they hired staff with lower qualifications and 31% acknowledged their service to their customers suffered.

Employment
Even with those staffing challenges, however, New Jersey businesses did see a small rebound in hiring levels in 2022 – although the numbers were not necessarily strong. Nineteen percent increased hiring this year, while 21% said they decreased hiring.

Looking to 2023, 30% predicted they will hire more, compared to 9% who predicted less hiring – a +21% net positive hiring outlook.

In 2022, 33% of respondents increased pay for employees by 5% or more. Two years ago, during the height of pandemic-related shutdowns and restrictions, that number was only 12%.

Despite gloomy economic outlooks nationally and in New Jersey, businesses expect that upward trend to continue in 2023, with 23% saying they’ll increase wages more than 5%. Another 32% said they’ll raise wages between 3% and 4.9% in 2023.