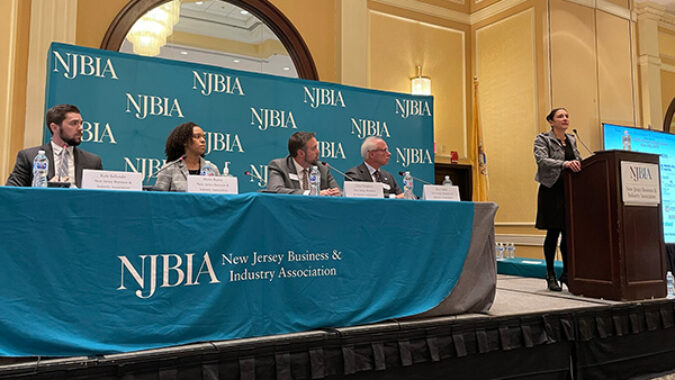 Capping off NJBIA’s annual Public Policy Forum this week, Chief Government Affairs Officer Chrissy Buteas put it simply: “The affordability and competitiveness challenge is real. We have a lot of work to do.” Closing the event, NJBIA’s full GA team presented its current priority focuses to help New Jersey’s economy.

A full video of the panel and Q&A session can be found here – with a few highlights below:

Speaking on budget and taxation issues, Emigholz said that while New Jersey is not “cash rich,” New Jersey has more cash on hand than it has in decades.

“And that gives us this transformational position we are in, where we can do something about it,” he said.

Emigholz said the billions of dollars in New Jersey’s coffers thanks mostly to federal recovery funds should be geared toward infrastructure, workforce development and innovation for the state to get the most bang for its buck – as pro-growth spending.

“I want to see as much of our billions of dollars sitting there in the Governor’s office – that the governor has to make a decision on how to spend – going to those three things,” he said. “And if we’re doing that in transformational ways, we’re going to be helping all of you out there and the entire economy and everyone who’s got a job in it.”

Emigholz also said New Jersey must take steps to move away from its national outlier status in the tax realm and more toward the middle.

Focusing on energy and environmental policies, Cantor said Gov. Phil Murphy’s mission for New Jersey to have 100% clean energy by 2050 needs to take costs, reliability, and feasibility into account.

“We’ve seen blackouts in California,” Cantor said. “We’ve seen Germany go through their energy shortages. We’ve seen Germany, by the way, using more coal than ever before because of their reliance of intermittence sources of energy (that) aren’t predictable and aren’t reliable.

“So the three things that we’ve demanding as we work toward this, is we want to know what the costs are. Is it going to be affordable? Because if you can’t afford your energy, than you really don’t have an economic future and people cannot afford to live in New Jersey.

“The third part is feasibility. It’s great to say we want all of our trucks to be electric, but when it comes to heavy-duty trucks, the technology really isn’t there right now to have long-haul, heavy-duty trucks based on electricity. At least not in any affordable manner.”

Bailey’s major focus is improving access to childcare, for the sake of New Jersey’s workforce and childcare businesses throughout the state.

Both Assemblywoman Nancy Munoz and Senate President Steve Sweeney also discussed the importance of increasing access to the childcare during the Public Policy Forum. And Bailey noted that Assembly Speaker Craig Coughlin is also making it a priority.

“One thing we’re really pushing for especially going into the next session….is making sure that we work toward universal pre-K and getting more children into preschool,” Bailey said. “And we make sure that the private sector is part of that model and we have a mixed- delivery system, because in the private childcare setting, they’re taking care of infants and toddlers.

Bailey also noted that many childcare businesses are owned and operated by women and minorities, and that NJBIA is urging Gov. Murphy extend the current practice of allowing childcare payment subsidies to be provided to childcare centers based on enrollment, rather than attendance.

“It’s critical to provide a steady stream of income for those childcare centers,” she said.

Sullender, the newest member of NJBIA’s Government Affairs team, said there are two ways to best look at the future of work in New Jersey – where people work and what kind of work people are doing.

He noted that recent Gallup survey data showed that 67% of U.S. white-collar workers were still working from home in some capacity, either part time or every day.

“That’s a dramatic shift of where we were just two years ago,” Sullender said. “Ninety percent of those workers said they wanted to continue that arrangement (permanently), in some capacity or full-time working from home.

As it relates to the kind of work people are doing, Sullender noted that surveys of large companies in the middle of 2020 showed that 80% of the responding executives had increased the digitization of their processes. About half of them said they planned to continue that process regardless of how long the pandemic lasted because, as Sullender said, “they were seeing certain impacts in terms of their effectiveness and how they could get the job done.”

“So, as we look forward, we have to plan for the displacement of the workers who are going to be most impacted,” Sullender added. “For NJBIA, that means a really particular focus on upskilling and reskilling some of our lower-skilled and lower-waged workers who are most likely to be displaced by these economic changes.

“As we go down a path of further automation, of further impacts from artificial intelligence and some other technological innovations, we have to make sure that this workforce is ready to adapt and ready to move horizontally across career paths and across businesses so that they can continue to be competitive – and our state’s economy can as well.”