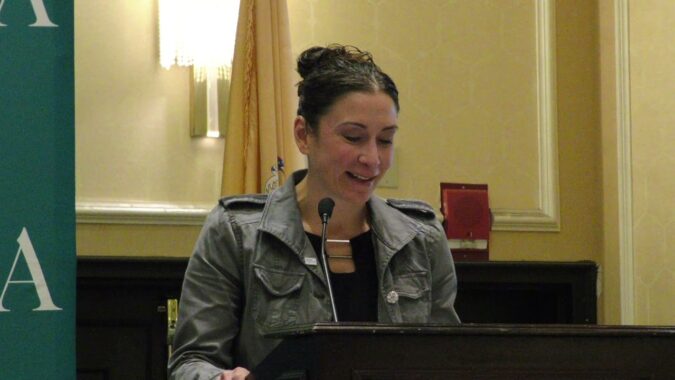 NJBIA honored six New Jersey leaders for their work on behalf of the business community at NJBIA’s recent 2022 Public Policy Forum, “The Road to Recovery: Businesses Leading the Way.”

Additionally, two legislators received the Paul L. Troast Award at the Nov. 30 event for their outstanding contributions to the State of New Jersey and its business community: Senator Nellie Pou (D-35) and Assemblywoman Nancy Munoz (R-21).

An award posthumously honoring political trailblazer Candace “Candy” Straight was also presented to her friend, Gail Gordon. An investment banker and film producer who worked tirelessly for decades to help women get elected to public office in New Jersey, Straight died in June at age 73.

Cimino, who will retire next month after four years as executive director of the Assembly Majority Office, has had a long and distinguished career in public service, as well as the private sector. Cimino is a former state assemblyman (1988-1992) and was commissioner of personnel in Gov. Jim Florio’s administration. His career in the private sector includes being the past president and CEO of the Robert Wood University Hospital in Hamilton, former partner of the Kaufman Zita Public Affairs Group, and the owner of a family retail business that was an NJBIA member.

“It has been a pleasure for NJBIA to work with him on a daily basis because we know he gets it and can quickly understand the business community’s concerns with any particular bill that we bring to his attention,” Buteas said. “And above all, no matter how challenging an issue might be, Skip always brings his affable manner and professionalism to the table every time.”

Prior to joining the New Jersey Council of County Colleges (NJCC) as president in 2018, Dr. Fichtner served as commissioner of the Department of Labor and Workforce Development in Gov. Chris Christie’s administration. Under his leadership, the department implemented new initiatives that expanded economic opportunity through data-driven partnerships with high schools, colleges, community-based organizations and employers.

“NJBIA has been absolutely thrilled to partner with Aaron and the NJCCC on two key initiatives: improving career pathways and making basic skills training more accessible for workers throughout the State of New Jersey,” Buteas said. “With his leadership, we know that these programs will be extremely successful.”

Savage recently retired as executive director of the NJ Council of County Vocational-Technical Schools, where for more than 20 years she advanced greater public understanding of what career and technical education (CTE) can provide for students. She currently serves as a consultant to that organization.

Buteas said Savage was a “true partner with NJBIA” who helped get health and engineering CTE programs included in vocational-technical schools. “And of course, she was the muscle behind advocating for the Securing Our Children’s Future Bond Act in 2018, which appropriated $220 million toward enhancing career and technical education programs to help bolster our next generation workforce,” Buteas said.

Senator Pou has served in the Senate since 2011 and currently chairs the New Jersey Legislative Latino Caucus and the Senate Commerce Committee, where she has taken on issues critical to the business community, such as the cost of local education funding, higher education, and increasing the skills of New Jersey’s workforce, Buteas said.

Buteas said Pou was a “true leader in the Senate,” noting the senator “always listens to the business community and has an open door.”

Since being sworn into office in 2009, Munoz has been a stalwart supporter of pro-business policies, reducing taxes and reining in state spending. Currently the Assembly Republican conference leader, Munoz also serves on the Assembly’s budget, health and housing committees.

During the pandemic, Assemblywoman Munoz stepped up as a volunteer nurse helping to administer COVID-19 vaccines and posting videos that showed people how to make their own face masks when there was a critical shortage of personal protective equipment.

“In that video she said six key words: ‘We are all in this together.’ And we’re glad she works together with New Jersey’s business community,” Buteas said.

In addition to her career in investment banking and as a movie producer, the late Candy Straight previously served as vice chair of the New Jersey Sports & Exposition Authority, as a member of the Rutgers University Board of Governors, and played an instrumental role in the election of Gov. Christine Todd Whitman in 1993 and 1997. Straight also served on NJBIA’s Competitiveness Council.

“It was a privilege to get to know her and be guided by her sage advice,” Buteas said. NJBIA will continue to present a Candy Straight award every year to honor individuals who capture that same trailblazing spirit and serve as role models for others, Buteas said.