NJBIA opposed a bill this week that sets new burdensome requirements for temp staffing agencies and makes third-party companies liable if the temp agencies they are using violate wage payment provisions of the legislation.

“This legislation contains several concerning and unworkable provisions that will negatively impact third-party companies utilizing the services of temporary workers,” NJBIA Government Affairs Director Alexis Bailey wrote in a letter to Assembly members in advance of the vote.

“As businesses continue to face workforce shortages across industries, now is not the time to advance this legislation without addressing these glaring concerns,” Bailey said.

Troublesome legal remedies contained in A-1474/S-511 include a “private right of action” against third-party companies that could lead to expensive class-action lawsuits with the potential for large settlements that drive up the cost of doing business, Bailey said.

The bill passed both houses this week but will require a re-vote in the Senate later this summer due to a procedural error.

“The inclusion of a private right-of-action often leads to costly lawsuits with little merit against employers, even for minor, inadvertent violations,” Bailey said. “The bill also provides for liquidated damages and attorneys’ fees which will encourage class action suits with the goal of large settlement payouts.”

The legislation also requires temporary workers to receive the same compensation and benefits as their equivalent employee counterparts, a provision that Bailey said was “unworkable.”

“Benefits can encompass a wide range of offerings such as health insurance, 401(k) matches, life insurance policies and other unique features of compensation packages,” Bailey said.

“Since temporary laborers are not employees of the third-party businesses, they cannot be directly enrolled into the various types of benefit plans that may be provided to a third-party business’ permanent workforce,” she said. “Additionally, temporary help service firms assign temporary laborers to various workplaces. It would not be possible for them to administer these equivalent, extensive benefits packages based on offerings that will vary widely across companies,” she said.

Bailey also took issue with the bill’s “four-hour reporting pay” requirement for temporary workers who are requested to report to a worksite but find no work available upon arrival.

“This reporting pay requirement is not consistent with current statute, which requires other types of employees to receive a minimum of one hour of reporting pay if they report to a worksite and their place of business is closed,” Bailey said. 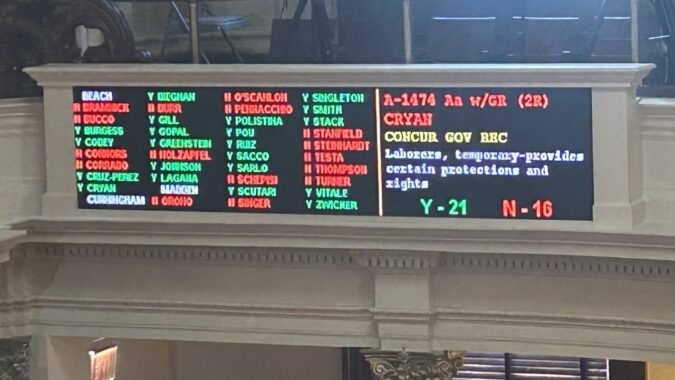