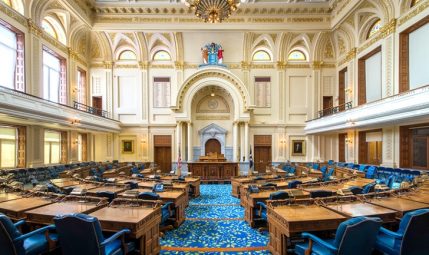 Republican lawmakers today announced their intent to convene a special session of the Legislature to prevent a massive payroll tax on businesses in order to replenish the state’s depleted Unemployment Insurance Trust fund.

Senate and Assembly Republicans said they circulated a petition to legislative Democrats that would constitutionally require the governor to call a special session – if it is signed by a majority of the members of each house of the Legislature.

The announcement comes as more Democrats continue to come out in support of the same goal.

“We’re calling on our Democrat colleagues who have witnessed the struggles of Main Street employers and listened to the desperate pleas of their constituents begging for help with unemployment to join us in petitioning the governor to call a special session of the Legislature,” said Senate Republican Leader Tom Kean.

“We don’t have to put more employers and jobs at risk when reasonable alternatives are waiting for the Legislature’s consideration,” said Senate Republican Budget Officer Steven Oroho. “Our petition provides Democrats opposed to the payroll tax increase an opportunity to help our businesses and the residents they employ. If they share our concerns, they should take action by signing the petition and working to get other Democrats to sign as well.”

Republican lawmakers said in a statement today that interest on approximately $160 million of UI Fund debt will begin accruing on Sept. 6 at a rate of approximately 2.3%.

Whether that happens or not is unknown. Senate President Steve Sweeney has said he has no plans to return the chamber back in session until after the November election.