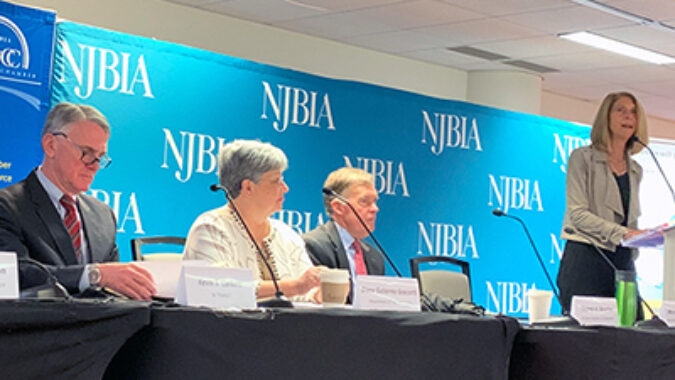 How do you move 40 million people a year to a single destination across the most densely populated state in the nation?

Transportation Commissioner Diane Gutierrez-Scaccetti and NJ TRANSIT President Kevin Corbett told business people at NJBIA’s Meet the Decision Makers on Tuesday that NJ TRANSIT is looking to partner with the private sector for fast, environmentally friendly transit solutions beyond the existing trains and buses that connect the Secaucus Junction train station to the new American Dream megamall and MetLife Stadium in order to handle that extra traffic.

“Hopefully it will be green, scalable and autonomous – and something that we can extend throughout the region to make us successful in terms of the movement of people, and to make sure from an economic standpoint that all of our venues are successful,” said Gutierrez-Scaccetti.

The two state transportation leaders are banking on the “Innovation Challenge,” which recently drew 54 companies to MetLife stadium, to provide the public-private partnership solution that will alleviate traffic congestion in the Meadowlands area.

NJ TRANSIT expects to issue a Request for Expressions of Interest in the coming weeks for potential partners to propose projects. The new transit link will need to help move as many as 2,000 people per hour from the Secaucus station to the 3-million-square-foot mall and entertainment complex. During football games or concerts, ridership could swell to as many as 20,000 people per hour.

“If American Dream is successful, then we’re successful. If the stadium can have more concerts and more people are able to come there because the transportation is better, then we’re all successful, and so are all of our businesses,” Gutierrez-Scaccetti said.

The commissioner, who also chairs the board of NJ TRANSIT, emphasized New Jersey’s transportation system must be viewed as a single network, not as individual silos of roads, trains, and buses. For example, if the trains are having problems, it affects highway congestion because more rail commuters start using their cars.

“It’s a single transportation network, and if doesn’t all work, then none of it works well,” Gutierrez-Scaccetti said.

NJ TRANSIT’s challenges have been well documented, but it is “on the trajectory to be the agency it once was,” said Gutierrez-Scaccetti who became DOT commissioner in 2018. “I can’t take something that was broke 10 years ago and fix it in a minute.”

Progress at NJ TRANSIT is happening, she said.

Corbett noted train cancellations for the first 10 months of this year are down 35% and on-time performance has risen by 3% to more than 91%.

“We have a long way to go from where we should be and from what our customers deserve, but that is encouraging data,” Corbett said.

Train cancellations are often caused by manpower shortages, but the agency currently has eight engineer training classes, which take a total of 20 months, underway, he said.

“We will be having another graduating class this month, next month and over the next few months so that each month it will gradually get better,” Corbett said.