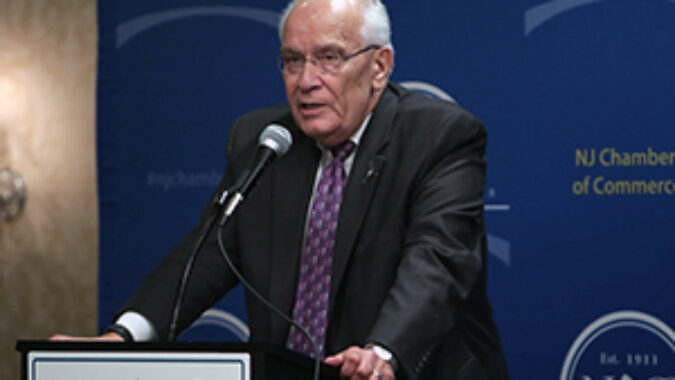 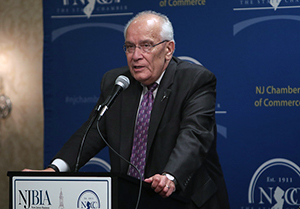 NJ Board of Public Utilities President Joseph Fiordaliso speaking to business leaders on Friday. (Photo courtesy of the NJ State Chamber of Commerce).

State Board of Public Utilities President Joseph Fiordaliso told a room packed with business leaders on Friday that Gov. Phil Murphy’s ambitious plan for the state to convert to 100 percent  clean energy by 2050 will pay dividends for the economy, not just the environment.

“New Jersey is at the forefront of an energy revolution that will fuel our economy and hopefully protect our environment,” Fiordaliso said. “This is the opportunity for new sectors of the economy to open to a new workforce and supply clean energy to our state.”

Speaking at a Meet the Decision Makers event hosted by NJBIA and the State Chamber of Commerce in East Windsor, Fiordaliso said the 2019 Energy Master Plan currently being developed will establish a strategic vision for clean energy production, distribution and consumption.

“New jobs, new industries and new workforce development will be needed as the staples of this new economy,” Fiordaliso said. He urged the business community to provide input at the public stakeholder meetings now underway that will help BPU formulate the state’s new energy policy that will include offshore wind, community solar and electric vehicles.

Offshore wind energy will be a key component of that energy master plan, Fiordaliso said. The governor wants offshore wind to generate 3,500 megawatts of energy, enough to power 2.5 million homes.

“Our ambitious offshore wind goals have drawn not only national, but international attention,” Fiordaliso said, noting New Jersey’s offshore wind solicitation was the largest of any state in the U.S. and had drawn the interest of European countries that want to do business in New Jersey.

Fiordaliso said too often discussions about clean energy center on how much it will cost to produce, rather than the economic and environmental benefits it provides.

“Our solar industry, which will be shortly celebrating its 100,000th solar installation, has created over 7,000 jobs, not including the jobs in ancillary industries that feed into it,” Fiordaliso said. New Jersey’s solar industry now producing 2.5 gigawatts of power and is the fifth largest in the United States.

However, in the early 2000s the state’s fledgling solar industry was criticized because of its cost, Fiordaliso said. “But what we have seen is that through competition, and yes through rebates and grants from the government, the cost has been decreasing and those grants and subsidies have been reduced dramatically because the industry has matured to a point where it is able to stand on its own two feet.”

“By 2025, the Governor would like 330,000 electric vehicles on the roads in New Jersey and that challenges us because we have to make sure we have the infrastructure that can support that,” Fiordaliso said. “There are plenty of gas stations around, but not charging stations right now,” and the BPU needs to be part of the process to rectify that imbalance, he said.

NJBIA and others in the business community have raised concerns about the cost to ratepayers of building the infrastructure for electric vehicles and other clean energy initiatives, especially when New Jersey electric utility customers now pay the highest rates in the PJM grid.

“We are constantly cognizant of that,” Fiordaliso told one audience member who expressed concerns about the impact of clean energy initiatives on ratepayers. “Our emphasis is to be prudent in our approach and to engage in a public-private partnership to achieve goals.”

Fiordaliso said he expected the offshore wind solicitations, for example, to come in at a “reasonable price” and that the state had considerable leverage with the interested companies that want to build wind turbines.