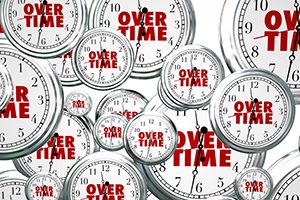 Businesses should start reviewing their worker pay schedules and exemption classifications now because big changes are expected in early 2020 to the federal rules governing which employees are exempt from overtime.

That was the message prominent labor law attorney Michael Shadiack delivered to HR professionals and company executives who attended NJBIA’s wage and hour law seminar on Tuesday in Bedminster.

However, the U.S. Department of Labor proposed new rules on March 8 that would raise the salary threshold from $23,660 to $35,308 per year.  If approved, this change will significantly increase costs for businesses because many formerly exempt employees will have to be paid overtime if they work more than 40 hours per week and earn a salary of less than $679 per week ($35,308 per year).

Shadiack said the proposed rule change is “gaining a lot of traction” and will likely be in place by January 2020.  Unlike the Obama administration’s unsuccessful 2016 attempt to more than double the exemption threshold to $47,476, this less onerous change proposed by the Trump administration is expected to prevail.

“The time to start preparing is now,” Shadiack said. “We have to start looking at our workforce, looking at their salaries, looking at who we have as exempt, and figure out if they will meet that new ($35,308) threshold.”

When the rule takes effect, employers will have two options. They can reclassify affected employees from exempt to non-exempt and pay them overtime whenever they work more than 40 hours a week, or they can raise the salaries of exempt employees to the new $35,308 threshold so they retain the exempt classification.

Shadiack cautioned that the salary threshold is only one factor in determining whether an employee is exempt from overtime. Equally important is the “duties test,” because only salaried employees whose duties involve relatively high level executive, professional or administrative tasks qualify for the exemption.

Executive Exemption
The executive exemption applies when a salaried employee’s primary duty is to manage business operations and direct at least two full-time employees or the equivalent (e.g. four part-time employees). To be exempt from overtime the employee must also have the authority to hire or fire workers, or his or her opinion in matters of hiring and firing carries considerable weight.

Shadiack noted it’s an employee’s actual duties, not an impressive job title, that determines whether they meet the FLSA criteria for an executive exemption.

“If you classify someone as exempt, we’ve got to look at what the job duties are in the job description,” Shadiack said. “That’s where you’re going to be able to defend yourself one day and justify your classification of that employee” by having a job description document that lists all his or her managerial tasks.

Administrative Exemption
The administrative exemption can be used for salaried employees whose primary duties are non-manual office work directly related to managing or operating the business and who exercise independent judgment on significant matters with little oversight. Examples include relatively high-level employees in HR, finance, accounting, marketing, advertising, and public relations.

“This is not going to be your receptionist, your secretary, your admins,” Shadiack said. “They are not going to be exempt. People sometimes pick up on the ‘administrative’ job title and get confused.”

“Essentially, these are doctors, lawyers, dentists, accountants and others with advanced degrees earned after a prolonged course of study who fall under this professional exemption,” Shadiack said.

“Folks like actors, cartoonists, musicians, and writers would fall under this exemption and receive no overtime,” Shadiack said.

Computer Employee Exemption
An exempt salaried employee must be a professional working as a computer systems analyst, computer programmer, software engineer or similarly skilled worker whose main duty is the application and development of these programs.

“If you have an IT help desk, they’re not exempt,” Shadiack said. “Don’t be fooled into thinking they qualify. These exemptions are for high-level computer professionals, such as software programmers and computer analysts,” Shadiack said.